Elena Allee is an artist originally from New York City and Vermont, currently settled and working in Western Massachusetts, having arrived here 14 years ago via Oakland, Los Angeles, and the central coast of California, where, concomitant with her studio practice, she had a clothing label, designed theater sets, and ran a nightclub/alternative theater space among other endeavors.
Elena received her BA in English and Spanish literature, with a second concentration in art, from Bennington College, and her MFA in painting from The Mason Gross School of the Arts at Rutgers University.
After years of showing her work in group and solo shows, Elena took time away from exhibiting, and cut down her studio time considerably for the last 16 years, to focus on working and raising her type one diabetic kid as a single mom. During this hiatus, she co-founded and co-directed a community education center and homeschooling co-operative, where she also taught art and writing.
Elena’s artwork engages a constant interplay between abstraction and figuration, the more figurative work often presenting narrative elements drawn from childhood photographs or photos she takes of moments from every-day life that include unpredictable formal elements (such as juxtapositions between disparate complicated patterns, unexpected perspectives, and saturated color that sometimes veers into the cartoony). She tends to work in series, often more than one different-but-related series at a time. The content of her work (nature as construct and/or memorial; the selectiveness of memory; loss or impending loss, both personal/psychological and societal/cultural/global) often hints at narrative tensions just below the surface, mirroring the tension created on the actual surface of the paintings through the formal elements.
Elena is finally able to get back to more time in her studio (though full-time is still a couple of years away), and is currently working on a number of painting commissions and a series of large drawings of endangered species (a percentage of the proceeds from which will be donated to helping the animals).
She has also cofounded, and is the Art Director for, MICA (Mothers Institute for Collaboration and Art), which will be presenting a 3-day festival at the Northampton Center for the Arts on Hawley Street over Halloween weekend.
Visit MICA’s website at: experienceMICA.com.
Elena is also co-owner of Alchemy Edibles, a gourmet artisanal chocolate company based in Chesterfield Massachusetts. 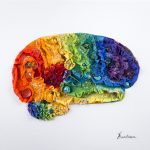 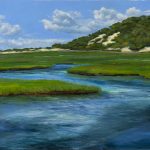