My vision as a sculptor draws its inspiration from the theater and opera, where I have worked as a mask-maker and makeup artist for over 30 years. In making masks for theater, I created artworks which, when combined with a living body moving under lights, revealed fascinating and often unintended dimensions of the sculpted faces. As I watched my masks come to life on the actor, I became intrigued with the notion of the “interface”– that point where the face of the actor meets the inner surface of the mask and is transformed into the character. This led to the creation of a series of sculptural (non-wearable) masks in which this inside surface becomes a canvas for elucidating the thoughts, history and personality of the person (whether real or fictional) depicted in the sculpture.

Concurrent with the evolution of these behind-the-mask portraits, my sculptural focus expanded to include full figures, many of which incorporate masks that serve a variety of metaphorical functions. My theatrical background led me to consider about not only what is behind the mask, but also what goes on “behind the scenes”, as it were, of the characters we play in both public and private moments. I strive to portray the gamut of human feeling captured in an instant of time. In a living face the emotion may be fleeting, but in my work, the pathos remains etched for all time, reaching out and reminding viewers of our human condition.

My studio in Cummington, Massachusetts is on the grounds of the former Cummington School of the Arts. While my focus is now on visual art, I design wigs and makeup for regional opera companies including the Berkshire Opera Festival, and create masks for theaters around the country including the Double Edge Theatre in Ashfield, MA. 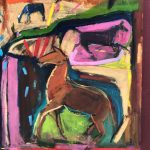